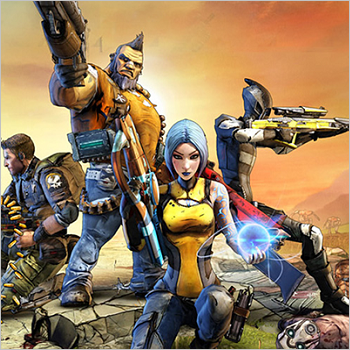 According to Gearbox head Randy Pitchford, the studio is instead working on properties including Homeworld and new, unannounced IPs.

In a lengthy interview with Polygon, Randy Pitchford, leader of Gearbox, said that his teams' current projects do not include another sequel to shooter-looter hit Borderlands. "We are not working on Borderlands 3," he said. "That is unqualified. We have more to do in the franchise, but no there isn't a Borderlands 3." Gearbox will make another entry eventually, but their hands are currently full with other projects, he said.

For the time being, work on the Borderlands franchise is being done by Telltale Game and their adventure series spin-off, Tales of the Borderlands, which was announced this past December. When Telltale approached Gearbox about the idea for the game, Pitchford, a fan of the studio's work on The Walking Dead and The Wolf Among Us, said he jumped on board immediately. "I couldn't say yes fast enough," he said. "It's been a lot of fun working with those guys ... I think they're better storytellers than we are, frankly."

Gearbox also met with Blackbird Interactive, made of former Homeworld staffers, and spoke with them about their current game intended to be a spiritual successor to the Homeworld franchise. This led to Gearbox deciding to finance and publish their game as Homeworld: Shipbreakers. Pitchford did not yet have a release date for the game.

Pitchford also revealed that Gearbox is currently working on two all-new intellectual properties for next-gen systems. One of them seems to be based on a project formerly known as Brothers in Arms: Furious Four, which was envisioned as an over-the-top WWII shooter with similarities to the film Inglourious Basterds.

The idea proved too crazy for the Brothers in Arms franchise, so Gearbox broke it off into its own IP. That project became an entirely new game, which Gearbox will announce when its ready, Pitchford said.