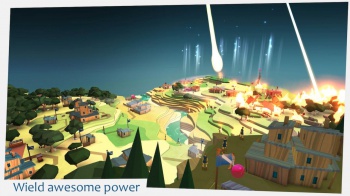 Peter Molyneux's Godus can be played for free, but don't call it free-to-play: he finds that term a bit disingenuous.

The upcoming deity-simulator Godus will be downloadable for free. Once downloaded, you can play it, and you don't have to pay any money until later in the game experience. You might be understandably tempted to classify it as "free to play," then - but its creator Peter Molyneux would reject that label. According to him, in his trademark grandiose style, Godus will be monetized in a way "that hasn't existed before."

"There cannot be a term that is less true," Molyneux says of free-to-play. "What we need is a new term. And that term is more like 'invest-to-play.' What really are we doing? We are tempting people to invest some of their money into a game."

That might seem like the same thing, but the key difference to Molyneux is the way that F2P games are built around their payment models. "We're saying: 'Be patient or pay money,'" he says. "That's not a delightful mechanic. That's not going to get people to invest their money."

Godus, then, aims to avoid the pitfalls of over-eager monetization, despite nominally sharing a business model. For now, Molyneux is keeping quiet about how exactly his plan will be different.