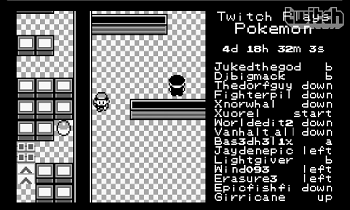 A custom Python script created by an anonymous user has allowed thousands of gamers to play the same game of Pokemon Red at the same time.

Playing Pokemon with others is pretty standard part of the experience. Heck, right back to the series earliest' days, the "catch 'em all" process required the cooperation of other players. That being the case, somehow we can't help but suspect that Nintendo didn't intend for cooperative play that involved thousands of people trying to play the same game at the same time.

That being said, that's exactly what's been happening thanks to an anonymous Twitch user who created a custom script allowing viewers to deliver remote commands to an ongoing (emulated) game of Pokemon Red. "I wrote a script in Python that listens for buttons said in chat and simulates a keypress for the corresponding button in the emulator," said the user. Pokemon, he said, "seemed like a natural choice due to its lack of reaction-demanding gameplay and very forgiving difficulty."

The response to the Twitch feed has been overwhelming with millions of users viewing the feed and thousands more spamming it with overlapping commands that, in turn, have slowed the game's progress to a snail's pace. "I didn't have any expectations of how people would interact with the stream, but I was very curious. I never planned on this many viewers/players." Twitch, in turn, sees this experiment as an interesting "entertainment hybrid" and a "wonderful proof of concept" that it "[hopes] to see more of in the future."