It's gone from suck, to blow!

Samsung and Dyson are now suing one another, in what might be the biggest news in vacuuming since that Oreck fellow started slinging his sucker on television. 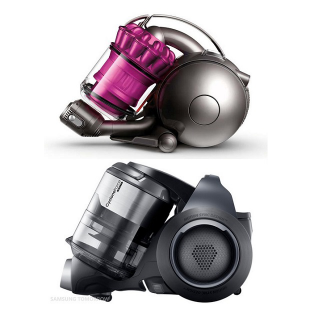 It all started five months ago when England-based Dyson sued Samsung for copying its canister vacuum. Specifically, Dyson claimed that Samsung had ripped off a steering mechanism design used in the latter's Motion Sync cleaner. Sir James Dyson, the engineer and founder of his namesake company, called Samsung's product a "cynical rip-off."

Five months pass, and now Samsung is counter-suing Dyson for over USD $9.4 million, as it claims the original patent suit has "hurt Samsung's corporate image," making the South Korean electronics giant look like a copycat. "Samsung's marketing activities were negatively affected by Dyson's groundless litigation, which is intolerable," said the same Samsung spokesperson.

It's hard to deny the similarity between the Dyson and Samsung vacuums (pictured above), but will we ever see a verdict. The end result could likely be some sort of cross-licensing deal, as is commonplace in the tech world.

Are you on Team Dyson? Team Samsung? Team Jacob? Let us know in the forums!