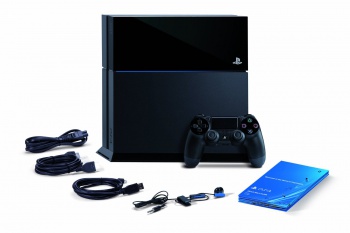 Following news over the weekend that PlayStation 4 sales in January almost doubled that of the Xbox One in the US, Sony has now announced that it has sold more than 5.3 million PS4s worldwide since the console's launch in November last year; and that the PS4 was the top-selling console in the US last month overall. Andrew House, president and group CEO of Sony Computer Entertainment states, "I am thrilled that so many customers around the globe have continued to select PS4 as the best place to play throughout and beyond the holiday season. We are delighted that according to the NPD Group's latest data, PS4 was January's top-selling console in the United States."

House adds, "The PS4 system's momentum just keeps growing stronger, and we are extremely grateful for the continued passion and support of PlayStation fans. February 22 sees the launch of PS4 in Japan, and I'm looking forward to Japanese fans sharing the excitement of the deep social capabilities and entertainment experiences only possible on PS4."

With the PS4 set to release in Japan officially later this week, that 5.3 million figure will most likely shoot up before the month's done. For comparison, the last official sales number Microsoft has revealed for the Xbox One mentioned that the next-gen console has moved over three million units before the end of 2013.

In other PS4 news, Konami has announced a limited edition Metal Gear Solid V: Ground Zeroes version of the console which will be released in Japan next month. Speaking of MGSV: Ground Zeroes, Konami has confirmed that the PS4 version will run at native 1080p, while the Xbox One will only manage 720p, which is the same resolution as the PS3 and Xbox 360 versions.