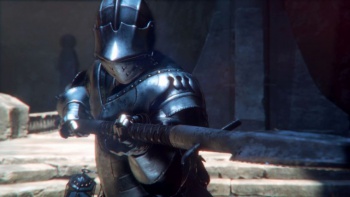 Deep Down will only feature a single, male, main character.

Earlier this week, Gematsu revealed through some translated footage that Capcom's procedurally generated dungeon-delver Deep Down will feature 12 characters, and none of them would be female, due to "plot reasons." The internet was very quick to angrily react to the news, crying sexism. In an effort to calm the masses, Deep Down producer Kazunori Sugiura has issued an official statement, clarifying a couple of misconceptions. Specifically, Sugiura confirms that there will only be a single playable character, rather than twelve, and while he is indeed male, the game's story will focus around him.

"I was informed by a representative of one of our overseas branches that an article containing misleading information regarding Deep Down has been recently circulating and drawing some attention. This article makes the claim that the game has 12 playable characters, all of whom are male. As producer in charge of this project, I would like to respond and clarify. While the main character of Deep Down is indeed male, he is the only playable character in the game. The story focuses on him and a group of allies known as the Ravens."

Furthermore, Sugiura added that while no official announcement of an international Deep Down release has been made, Capcom is very happy that it is drawing attention in regions other than Japan, and hopes to release more information soon.

Details on Deep Down are pretty scarce at the moment. We know that it will be free-to-play, a PlayStation 4 exclusive, have 4-player co-op and release some time this year, but other than that, nothing much else. It will be set in some kind of sci-fi fantasy setting, not unlike Ubisoft's Assassin's Creed series.

So what do you guys think? Is it "sexist" to not include a female playable character because of the game's plot?