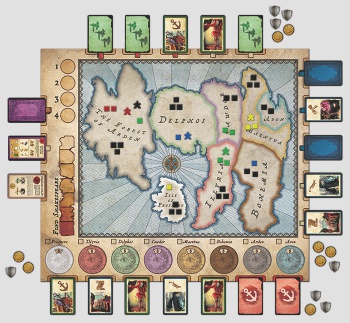 Round 1: Hamlet vs. Lady Macbeth. Go.

The publishing company IDW, for over a decade now a mainstay of the comics scene, is branching out into tabletop games by opening up a games division. As part of their launch, IDW is kickstarting a semi-cooperative board game called Kill Shakespeare by Wolf Plancke & Thomas Vande Ginste - the designers of the excellent Yedo. Like Yedo, Kill Shakespeare is an area control game about armies locking down regions. Unlike Yedo's warring samurai, the premise of Kill Shakespeare is that Shakespeare's works all exist on a single island. An island under the cruel tyranny of Richard III and Lady Macbeth. According to the designers, "Players will go on quests assigned by the bard himself in an attempt to prove themselves worthy of taking over as protector of the realm."

I know, I'm hyperventilating too. Shakespeare is my homeboy.

It's a semi-cooperative game, where players have to band together against the evil Shakespeare characters for victory, but the player who does the most to help is the biggest winner - also known as the one who gets to rule the ashes. Kill Shakespeare is, for the unfamiliar, based on the IDW comic series of the same name.

On final release the game will cost $59.99, but is as much as $20 cheaper for early backers of the Kickstarter campaign. It'll be for 2-4 players and cost $59.99. The project is available to backers outside of North America.