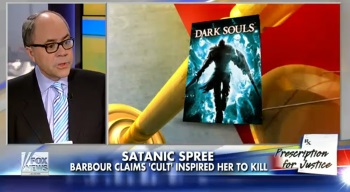 Fox News says "Craiglist Killer" Miranda Barbour is known to have an "affinity" for Dark Souls.

Miranda Barbour, dubbed the "Craigslist Killer" for stabbing to death a man she and her husband met through Craigslist, recently confessed to killing more than 22 people across the U.S. in a "Satanic" murder spree that began when she was just 13. Authorities have thus far found nothing to corroborate her claim, although the investigation is still ongoing, but to nobody's great surprise Fox News is out in front of the situation, suggesting that her murderous urges may somehow be connected to video games.

Fox News Legal Analyst Peter Johnson Jr. said he doesn't think it's possible that Barbour could have murdered as many people as she claims, but that doesn't stop him from ruminating on why she did it. "We're talking about a girl at age 13, 14,15, after being part of one murder, going on and completing another 20-something murders," he said. "We do know that she has an affinity for the fantasy game called Dark Souls, which is a very dark, death-laden video game that's on PlayStation and other kinds of video-type things where there's a lot of killing involved."

Johnson doesn't come right out and say that video games made her do it, but it does top his list of factors that could have turned her into a devil-worshiping thrill-killer, ahead of an abusive childhood and an unwanted teenage pregnancy that ended in abortion. He also acknowledged that Barbour could be making the whole thing up to lay the groundwork for an insanity defense in the one killing she's actually believed to have committed, presumably to ensure that Fox's "fair and balanced" reputation remains unsullied.