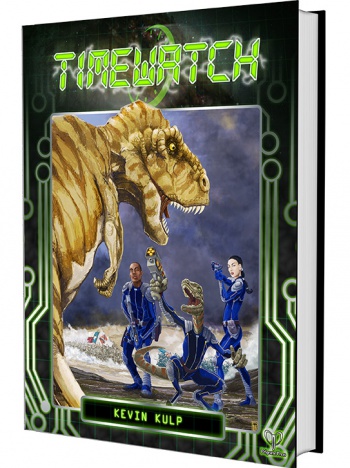 With one day left to go, the Kickstarter campaign for the TimeWatch: GUMSHOE Investigative Time Travel RPG has raised over $80,000.

Few Kickstarter campaigns can boast 2,000% funding levels, but TimeWatch's is one of them. Sure, the campaign's goal was a mere $4,000, but it blew past that and received $23,000 in pledges within 24 hours. Now, with one day left to go before the campaign ends, TimeWatch has received over $80,000 in funding.

ENnie-nominated designer Kevin W. Kulp is "both grateful and incredibly humbled by the response." A staggering 35 stretch goals have been unlocked, and the next one is right around the corner at $85,000: a 30-40,000 word standalone guide that will come as a free PDF to all backers of $25 and up.

TimeWatch is a tabletop RPG of investigative time travel that takes Robin D. Laws' GUMSHOE rules and tunes them for improvisational, fast-paced play. Features include time chases across multiple eras of history, investigative abilities that encourage clever and imaginative tactics, and rules that embrace using paradox and time-travel to your advantage when solving mysteries and battling foes. A given example of that last feature reads, "Leave yourself a note from the future, or have your future self clock in to lend a hand when you need it the most." That alone intrigues me; I'd love to see how it plays out in-game.