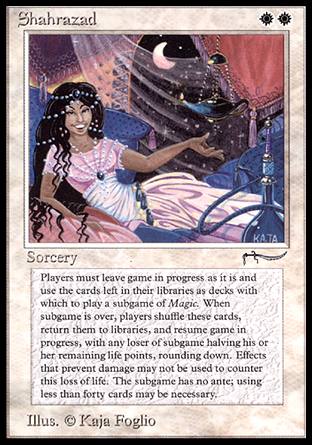 Garfield also spoke about how tournament play influences which new rules are added to Magic.

Magic: The Gathering creator Richard Garfield says that one of his favorite cards is Shahrazad, from the early expansion set Arabian Nights. For Garfield, apparently and unsurprisingly, his favorite cards are the ones that most fully manipulate the basic structure of the game. "I like cards like that," Garfield said in a VICE interview, ""that mesh well with the flavor they are trying to convey, and also take you out of the game into a new space."

Garfield also offers up opinions on how the runaway success of Magic's tournament play: "There were a lot of rules we had to formalize and take control of. A lot of the things I would have published in '93 can't be published now because they would do something that wouldn't be good for the tournaments." While Garfield doesn't say that limitation is an explicitly bad thing, his comments certainly chart Magic's evolution from scrappy indie gambling CCG in the early 90s to the circuit-dominating monster that it is today.

The full interview includes thoughts on topics as diverse as Poker, which Garfield calls his perfect game, and the vast range of house rules with which people play Monopoly.