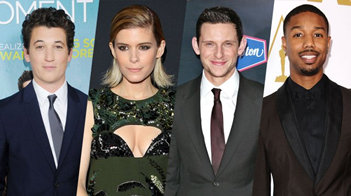 20th Century Fox has revealed the cast for its upcoming Fantastic Four reboot.

The last time that a Fantastic Four movie graced the big screen, Barry Bonds was still hitting steroid-fueled home runs and the original iPhone had just been released. But the folks at 20th Century Fox are finally rebooting the turquoise super team, and today the cast was officially unveiled.

Unlike the previous versions, which included big names like Michael Chiklis and Jessica Alba, the reboot's cast is made up of actors whose names might not be immediately recognizable but their faces will be familiar. Kate Mara, who will play The Invisible Woman, is probably the biggest celebrity on the team. If you recently finished binging on House of Cards, you're familiar with Mara's portrayal of Zoe Barnes.

Miles Teller, on the other hand, is probably the least familiar actor on the list. You may have seen him in 2011's Footloose reboot or last year's 21 & Over, but once he puts on Mr. Fantastic's blue spandex, all the nerdy ladies will swoon.

The Thing will be played by Jamie Bell whose resume includes blockbusters like Billy Elliot and King Kong. Plus, he recently had the lead in Spielberg's The Adventures of Tintin.

The most interesting casting decision, however, was leaked several months ago; Michael B. Jordan will play The Human Torch. Jordan, who had major roles in Friday Night Lights and The Wire, is actually one of my favorite upcoming actors, so I was happy to see him score the part. But the fact that he's black has ruffled the feathers of some comic book purists.

But lets not forget that The Fantastic Four was created in 1961, a time when black characters weren't exactly common. And these films have their own unique mythology, so a little cultural diversity shouldn't be scary. Plus, it opens the door for Donald Glover to play Spider-Man, which would make the internet happy.