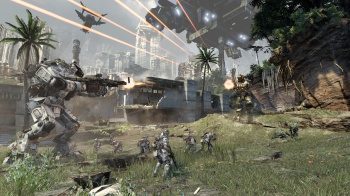 One of the producers on Titanfall says the idea that Respawn paid out bribes in exchange for positive press coverage is nothing short of insanity.

The response to Titanfall has thus far been very positive, as consumers and critics alike take their turns saying nice things about their experiences in hands-on previews and the all-too-short beta period. But as so often seems to be the case, when the gaming press really likes something, gamers start to get suspicious.

That's an awfully broad generalization, but it's typified by comments like the one on NeoGAF claiming that "the concept that money didn't cross hands for this [positive coverage] is just as ridiculous as believing your secret Nigerian uncle is a prince." The only question, according to the writer, is whether the payola came as a straight-up bribe or in a more subtle form as a generous ad buy.

It's a patently silly idea, but enough people seem to take it seriously that NeoGAF user and Respawn Entertainment employee DKo5, identified by PCGamesN as producer Drew McCoy, felt compelled to wade into the fray and set things straight.

"Anyone who thinks we weren't living in the shadow of decade+ old established franchises at our reveal at E3 are as crazy as their conspiracy theories of anyone getting paid off," he wrote. "We've had to fight tooth and nail to have a game that anyone would even know existed, let alone be excited for and want to create coverage of. I get it that its not for everyone, but to say we're paying anyone off is downright insanity. Not to mention the height of insulting."

It's a bit rich to suggest that the studio that created Call of Duty had to "fight tooth and nail" to get attention for its Next Big Thing, but there's no arguing his overall point. Claims that the fix is in are ridiculous, especially since the public has been able to take the game for a spin and seems to like just as much as the pros. And even if that sort of payola was prevalent in the industry - and I assure you, it is not - even the most cynical observer would have to admit that when everyone likes your game, you don't really need to pay people to say so.

Extra Punctuation: Triple-A Ain't What it Used to Be Yahtzee Croshaw 109 Comments
Comments on