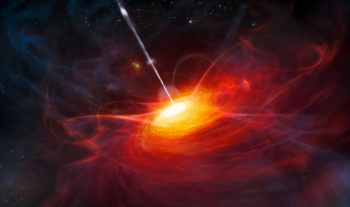 MIT researchers have proposed an experiment involving the observation of distant quasars that could close a final loophole and prove our universe is governed by quantum mechanics rather than classical physics.

A theorem devised by physicist John Bell in 1964 stipulated that classic physics cannot reproduce all of the predictions of quantum mechanics. Bell's theorem, however, had three major loopholes, two of which have already been a closed. In a paper published this week in the journal "Physical Review Letters," MIT researchers have proposed an experiment that may close the final loophole and prove that our universe is governed by quantum mechanics.

The final loophole implies that a physicist running an experiment to measure a particle does not have complete free will in choosing the settings of his detector instrument, resulting in biased measurements. If that sounds far-fetched to you, that's because it is - but improbable is not impossible.

"It sounds creepy, but people realized that's a logical possibility that hasn't been closed yet," says MIT's David Kaiser, the Germeshausen Professor of the History of Science and senior lecturer in the Department of Physics. "Before we make the leap to say the equations of quantum theory tell us the world is inescapably crazy and bizarre, have we closed every conceivable logical loophole, even if they may not seem plausible in the world we know today?"

Kaiser, along with MIT postdoc Andrew Friedman and Jason Gallicchio of the University of Chicago, have proposed an experiment to close this third loophole by using distant quasars to determine a particle detector's settings. The selected quasars would be on opposite sides of the sky and thus out of causal contact for some 14 billion years - in other words, no event in the history of the universe could have affected both quasars, given their distance, the age of the universe, and how long light takes to travel.

The reasoning behind this experiment is that since each detector's setting would be determined by sources that have had no communication or shared history since the dawn of the universe, it would be impossible for them to "conspire" to give a biased measurement.

"I think it's fair to say this [loophole] is the final frontier, logically speaking, that stands between this enormously impressive accumulated experimental evidence and the interpretation of that evidence saying the world is governed by quantum mechanics," Kaiser says.