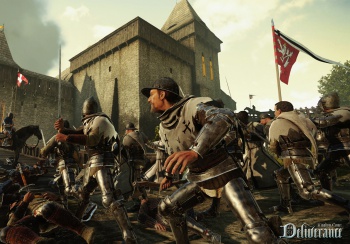 The teams behind Star Citizen and Kingdom Come: Deliverance have decided that they could learn a thing or two from each other.

Making games is hard. Even more so when you're working on a cutting-edge engine and shooting for photorealistic graphics. So when Cloud Imperium Games, developer of the crowd-funding poster child Star Citizen, noticed that fellow indie developer Warhorse Studios was also working on an advanced game (Kingdom Come: Deliverance) in the same engine, they got in touch. After some discussion, it seems the two studios have decided that - surprise - it's a lot easier to develop software when you can compare notes with your peers.

Cloud Imperium founder Chris Roberts reached out about the "unofficial partnership" after seeing Kingdom Come's debut trailer. "The characters and outfits I saw working in-engine in the trailer impressed me so much that I contacted the team to talk about what was going on under the hood," Roberts wrote on his website. "Star Citizen doesn't need peasants and knights... but it does need a robust character creation system for the persistent universe. And that technology is exactly what Warhorse is building for the CryEngine."

A lot of publishers might shut down a proposition to trade development secrets, but the crowd-funded team at Warhorse liked the idea. Cloud Imperium has more than a year of development experience with CryEngine to share, and the tech that Warhorse has already been working on fills an important gap in Star Citizen. "I've always said that independent developers should stick together," Roberts says, "and the potential good for both games that can come from this unofficial partnership if proof positive!"

The fruits of this agreement probably won't be visible to players - you won't see armored knights in Star Citizen or spaceships in Kingdom Come - but what will be visible is the amount of development time this will save, hopefully getting both games finished earlier than they could have been individually.