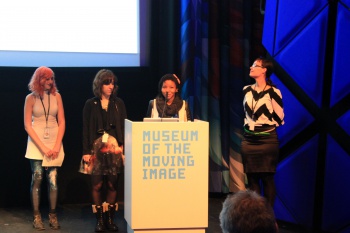 The four women of Code Liberation Foundation got together with the aim of providing safe spaces for women to learn how to code. At IndieCade East they spoke about their shared experiences growing up with media that discouraged their voices and how they plan to change video games' image problem. Their solution - teach women how to code and that their voices are important.

Code Liberation Foundation's Catt Small, Phoenix Perry, Jane Friedhoff, and Nina Freeman are all women who were interested in programming at a young age but were discouraged from the field before college. They're now all back to making games and hope to fix the damage that prevents women from entering the field.

In her portion of the talk, Perry delivered harsh statistics. A Bureau of Labor Statistics chart showed a decline in women programmers since 1991. In 1987, 42 percent of American programmers were women. Now only 25 percent of programmers are women. In games programming specifically, women make up four percent.

Perry believes advertising is the cause behind the change decline in the 1990s. At this time, companies were heavily advertising personal computers, targeting men as family breadwinners. She displayed numerous misogynistic ads, one of which read, "Don't feel bad, our servers won't go down on you either." Game companies had similar ads, and one depicted a man handing a crying woman a tissue with his foot because he was too busy playing a game.

Small explained to the audience that as a woman growing up during this time, media fed her messages that women lie, fight over men, and exist to have a family. She pointed to covers of Cosmopolitan and said, "Society pushes us to be this amazing, sexy, tiny goddess who does nothing but have sex and know the perfect moves for her guy and the perfect style." In comparison, Perry showed an issue of Cosmopolitan from 1967 that featured a female programmer.

The problem continues today. Perry pointed to several gaming advertisements, such as a Sony ad that compared the PlayStation Vita to a woman with four breasts. Perry says it's time to fix this image problem, but how? "We undo the damage," Perry answers. "We woman up."

Code Liberation offers free classes for women on GameMaker, Unity, HTML, openFrameworks, and Processing. At IndieCade East, Friedhoff led an all-day Processing workshop. The organization holds most of its classes at NYU's MAGNET Center in Brooklyn, NY, and plans to hold an upcoming C++ course, workshop about making games for the Kinect, and an online series for women outside of New York City. In addition, Code Liberation's slides from workshops are available to view for free.

Code Liberation also works to inspire young girls to code and express their voices. Freeman's passion for teaching high school girls comes from the fact that computer science courses in secondary education have declined since 17 percent since 2005 and that only 18.6 percent of the students who took the AP Computer Science exam last year were women. Freeman teaches classes at a Brooklyn all-girls high school. Students who largely had never programmed before had the opportunity to make prototypes of small games, often drawing from their own experiences.

"I want to show [girls] that their voices are just as important as anyone else's," Freeman said.

By teaching women how to make their own games, Code Liberation Foundation plans to leave no coder behind. Classes are geared toward beginners with no prior experience whether you're in high school or long out of college.