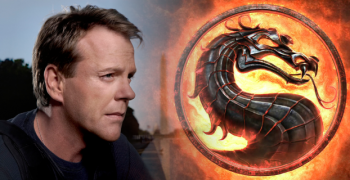 It's no secret by now that actor Kiefer Sutherland (24) is doing voice-over duties for Metal Gear Solid V: Ground Zeroes as Snake. However, what we didn't know is the actor has also been tapped to play an unspecified role in a yet-to-be-announced Mortal Kombat game. This revelation was outed by the actor himself in an interview with IGN where he was discussing his role for Metal Gear Solid V: The Phantom Pain. According to Sutherland, "I did Mortal Kombat, and that's such a huge game, but it's so not like [MGS5]." He adds that he has already completed work in Mortal Kombat "pretty quickly compared to [MGS5]," though he didn't specify which role he was playing.

To date, publisher Warner Bros. has yet to respond to inquiries regarding Sutherland's involvement in the franchise, which is understandable since it has yet to even acknowledge its existence. It's also unknown whether Netherrealm Studios -- formerly known as Midway Games -- is involved in the new entry in the fighting game series. But if a new Mortal Kombat game is brewing, odds are development duties will once again be handed to Netherrealm Studios, since it's headed by MK co-creator Ed Boon and has developed virtually every main entry in the series.

Aside from MGSV: Ground Zeroes which will be released on current and next-gen consoles this March, Sutherland is also set to reprise his role as counter-terrorist agent Jack Bauer in Fox's re-launch of the hit TV Show 24: Live Another Day, which is set to debut this coming May.

With the way things are going, Sutherland just might be the next Nolan North of video games. What other gaming franchises would you want Sutherland's gravely voice to be heard on next?