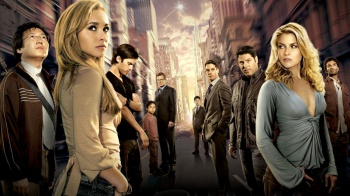 Heroes Reborn will continue NBC's story of superpowered individuals with a 13-episode mini-series and digital-exclusive tie-in.

When NBC's Heroes first debuted in 2006, it was easily one of the best superhero stories to appear on television. Between its solid character development, interconnected plot threads, and Zachary Quinto's debut as a superpowered serial killer, Heroes surprised fans and critics alike, leaving them excited for upcoming episodes. Unfortunately, each subsequent Heroes season dropped the ball in the storytelling department, until the show was finally cancelled after four years. Still, when Heroes was good it was really good, so fans have long hoped the show would return for a more conclusive finale. Thankfully, it seems it will get its chance next year with a 13-episode mini-series and digital tie-in that reintroduces the superpowered universe.

"The enormous impact Heroes had on the television landscape when it first launched in 2006 was eye-opening," president of NBC Entertainment Jennifer Salke said. "Shows with that kind of resonance don't come around often and we thought it was time for another installment. We're thrilled that visionary creator Tim Kring was as excited about jumping back into this show as we were and we look forward to all the new textures and layers Tim plans to add to his original concept."

Digital tie-ins are nothing new for Heroes; in fact, NBC used to host a long-running webcomic that heavily expanded the show's backstory. The real question is which actors will come back for the new mini-series. Zachary Quinto's Sylar was a breakout role and fan-favorite character, but with the Star Trek reboot under his belt, it's uncertain that he'll return. Hayden Panettiere, Milo Ventimiglia, and Masi Oka also had major roles throughout the series, and that's not even scratching the surface of the extended cast.

By the time these digital tie-in are revealed, we should have more details on what to expect. In the meantime, I'll be hoping that the Heroes mini-series harkens back to the success of season 1, or failing that, brings some closure to the series and characters.