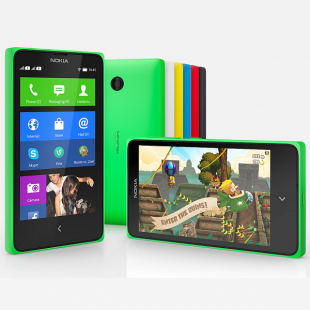 Nokia kicked off Mobile World Congress by taking the wraps off its new X line of smartphones.

The X (89 Euros), X+ (99), and XL (109) are all entry-level smartphones, designed for regions where smartphones aren't completely ubiquitous yet. The hook? While the installed OS looks and feels like Windows Phone, it's actually a heavily skinned and customized version of Android.

The X line is about as far from a "vanilla" Android experience as you can get. None of the trio will have the familiar Google UX/UI, and certain aspects of the Android ecosystem, like the Google Play store, will be absent. Third-party app stores will come pre-installed, so we aren't in dumbphone/featurephone territory by any means.

Many of the included apps, along with receiving the Nokia design touch, are replacements for Google's own, and many will be familiar to those who've used other recent Nokia smartphones. Fastlane is included as the notification center, while other apps and services have been designed or tweaked by Nokia. With that in mind, you'll still be able to sideload any Android app you can't find in the included app stores.

Because these are Android devices in Windows Phone clothing, several Microsoft services and apps will be pre-loaded on the X devices. OneDrive, Outlook, and Skype will all be included, among others.

As for hardware, it's all fairly pedestrian, as is the case with most $100-$150 smartphones. The X and X+ share much of the same hardware: 1 GHz dual-core Snapdragon CPU, 4 GB of internal storage (with microSD expansion), 3MP camera, and a four-inch 800x480 LCD display. The X+ gets 768 MB of RAM to the X's 512 MB, as well as an included 4 GB microSD card. The XL comes with a larger display (five-inch), and improved camera specs (5MP in the back, and 2MP in the front).

All three slabs are headed for "growth markets" like South America, Eastern Europe, and parts of Asia -- no North American availability is planned at the moment.