Laptop collaboration will debut at the Geneva International Motor Show next month. 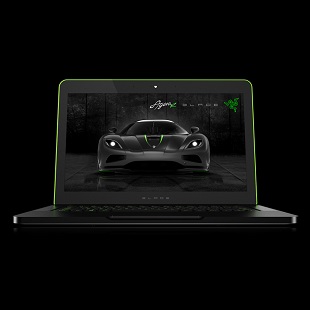 Razer has announced a new partnership with Swedish supercar designer Koenigsegg, makers of the incredibly fast and striking CCX and Agera R mid-engine marvels. The first fruit borne from this alliance? A Koenigsegg-themed Razer Blade laptop.

Largely an aesthetic makeover, the Koenigsegg Blade will feature the Koenigsegg badge on the lid in lieu of the Razer logo. The changed badge is also flanked by green accents and added design lines, giving the lid a wholly new look. As for the hardware, Razer told me the partnership model will be the highest-spec Blade, complete with an Intel Core i7 quad-core CPU, Nvidia GTX 765M GPU, 8 GB of DDR3 memory, and a 512 GB SSD.

The Koenigsegg Blade will make its debut at the Geneva International Motor Show in March, being shown side-by-side with the 2013 Agera R. Because the model is not for sale, only a select few Koenigsegg owners and Razer fans will be able to obtain the limited edition Blade. Razer is currently running a giveaway on its site for a Koenigsegg Blade -- you can enter the contest here.

The Koenigsegg Blade sounds like only the start, as the limited edition laptop is only "...a first step in a long relationship from which more exciting products can be born and brought to market." Here's hoping the next project is a wholly new product, and not just an aesthetic touch-up.