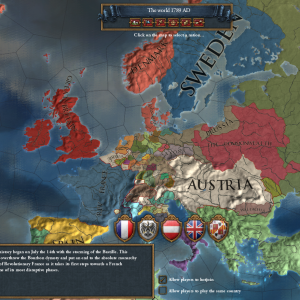 In fact, all of Paradox Interactives' games have ludicrously high average play times.

We've all done it. A Steam sale pops up and we drop 5 or 10 bucks on a title, and we might only play it for a few hours, if we install it at all. In contrast, games put out by the Swedish publishing house Paradox Interactive set their hooks in players and rarely let go. Paradox CEO Frederik Wester told me at the company's annual meeting last month that their games have an average play time on Steam of more than 190 hours. There are only a few games I've played for that long, and most of those are MMOs, but it's standard operating procedure for the deep strategy games like Europa Universalis IV for which Paradox is famous. Wester says the high play times are directly responsible for Paradox's commercial success.

"To a gamer, value for money is incredibly important," Wester said. "If you pay $40 for a game you play once and never touch again, you might not feel like that was a good value. But if you buy a game for $40 that you play for months, or even years, you're probably going to feel that you received a great value for your money and share that feeling with someone else."

Let's put that 190 hours in perspective. That's almost 8 days of solid play time. And that's the average for someone who plays Paradox games. That means there are people who play the game for thousands of hours to offset the few who might pick it up for only an hour or two.

The crazy thing is that the amount of time gamers play Paradox titles does not slow down even years after the game is released. Crusader Kings II came out in early 2012, and, while it's had a bunch of expansions, it's no longer what you would call "fresh". But in the last 30 days, according to SteamCharts, CK2 has been played for 2,273,479 hours total. And Europa Universalis IV, which came out last year, has even more time played in the last 30 days: 3,211,400 hours.

And while there is multiplayer in these games, and it's quite enjoyable, Paradox games are mostly played on your own so you can't really compare them to perennial top-performers on Steam like Dota 2 or even Call of Duty

From the design perspective, the open-ended grand strategy games Paradox Development Studio makes are specifically created to give the players freedom to explore the simulation for as long as they want. "I see the amount of hours players sink into our games as hard evidence that gamers want freedom," said Johan Andersson, studio manager. "We want you as a gamer to have freedom to set your own goals, decide what tools to use and make choices."

Andersson takes the high average play times to heart. "That gamers get so engaged that they continue playing our games for hundreds of hours is of course the biggest compliment we as a game developer can ever get," he said. "I see the amount of hours players sink into our games as hard evidence that gamers want freedom."

It's not just a design philosophy for Paradox; the hyper-engaging games are earning gobs of money for the publisher. Paradox has seen great success in the last few years with a string of hits which include Magicka, CK2 and EU4, although there have been more than a few duds like Impire and Sword of the Stars II. The grand strategy games may not be for everyone, but the number of gamers who respect the value Paradox delivers is growing.

"Our goal at Paradox Interactive is to run a successful business in the long-term, which means creating products that keep people coming back for more," Wester said. "We try to create games that are not only a good use of your time, but also a good use of what is in your wallet."