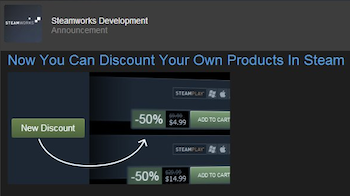 Prepare for even more wallet assaults in the future.

While there is the occasional dissenter, most people agree that buying games for less money is a good thing. While the ancient world revolved around various religious calendars, the modern one seems to rotate based on seasonal Steam Sales. Between the huge winter and summer celebrations are a regular rhythm of weekend sales and weeklong deals. Now, things are going to get even more crazy as Valve has handed control over to developers to run their own discounts, effectively making anytime saletime.

The update to the Steamworks developer tools was spotted by Reddit user Sharkiller. It allows developers two different options for discounting their wares. They can either opt-in to join one of the sizable Weeklong Deals and get free promotion, or simply set their own custom discount and do it themselves.

Back in the early days of Steam, some developers had an aversion to the service because Valve wasn't just a content distribution platform, it was also a competitor. Today, they join because that's where the customers are. Moves like this and Greenlight go a long way to make Steam as neutral a platform as possible. It also lets us stuff our libraries with even more games, which can only be a good thing.