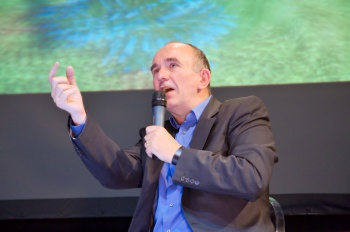 Peter Molyneux says he will never be able to make a game that matches the "perfect gem" in his mind.

Peter Molyneux, creator of Black and White, Fable and most recently Godus in an interview with Develop has claimed that Fable III was a "trainwreck", and that he will never be able to make his "perfect gem" of a masterpiece, as the creative process is subject to "empirical decay" from inception to final product.

Molyneux has built up a kind of infamous reputation as someone who likes to over-hype his games with outlandish claims that never come to fruition in the final product. Molyneux explains that his claims of grandeur are never meant to be misdirection, just his unbridled passion.

"The trouble with me is I do this stupid thing, and I always do it, where I start talking in an excited way about what I'm working on before I'm finished."

"In my mind, as a designer, whenever I'm making a game I have this perfect jewel in mind," he said. "Fable for me was this beautiful, incredible, amusing, funny, artistic, wonderful gem of a game that anyone could play, that tugged on the heartstrings and that was instantly engaging. The gem that was in my mind has never come to be, it's always flawed in some way."

He went on to claim that while Fable II made some great strides in the right direction, Fable III fell very flat. "Fable III was a trainwreck. It was built to be much bigger than what it was constrained to be and eventually ended up as."