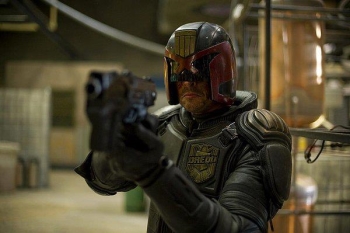 Karl Urban spoke to press at the Destination Star Trek Germany convention about a possible sequel.

Speaking to press at the Destination Star Trek convention in Frankfurt, Karl Urban gave fans of the 2012 action flick Dredd renewed hope for a sequel. Speaking to press before the convention, one of the first questions asked to Urban was about the possibility of a Dredd sequel. He said that "conversations" are happening between the studio, the director, and write Alex Garland. Urban had previously stated that a sequel was possible, especially with DVD and Blu-ray sales overtaking the film's poor performance at the box office. Dredd's worldwide box office gross was just $35.6 million, well below most summer blockbusters. However, in its first week Dredd sold 650,000 units across DVD and Blu-ray.

Several other Star Trek alumni answered press questions. William Shatner spoke about his upcoming documentary Wacky Doodle about the making of Star Trek: The Next Generation. In September, Shatner described the documentary to Rolling Stone, saying, "All of the writers in the documentary said the show was all wacky doodle, so that's what I'm calling it. It's about the shenanigans that went on in the first two years of making Star Trek: The Next Generation." Shatner also insisted that there is no chance he will appear in J.J. Abrams' Star Trek movies. Connor Trinneer, who played Charles "Trip" Tucker on Star Trek: Enterprise, had sad news for fans hoping to see more of the show. An online campaign to have Enterprise revived on Netflix has gotten significant fan support, but Trinneer says that Paramount and CBS have no appetite for more episodes.

Personally, I'd love to see a Dredd sequel. It's a fun film, heavily inspired by the comic book series, and Urban manages the helmet-and-chin look handily. Given the other option for super cop movies right now is the disappointing Robocop reboot, I think I'll go give Urban and Lena Headley's scarred and ruthless drug lord Madeline Madrigal another watch.