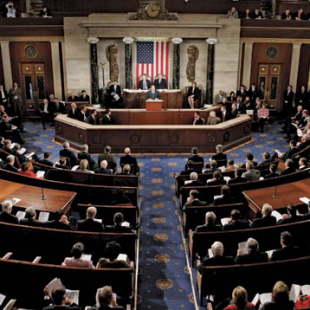 The House Committee on Ways and Means has released a tax reform plan that includes provisions to strip violent game makers of a valuable tax credit.

Someday I think we're going to look back on the years where the government picked on games and laugh. "Silly democratically elected representatives," we'll say, rolling out eyes at the inanity of government bodies treating a successful industry like the bogeyman in the midst of a snails paced economic recovery.

Sadly, since we haven't yet reached that beautiful future just yet, we're stuck dealing with the present. A present that includes a recently unveiled tax reform bill that, if passed, would punish American companies that make violent video games. According to page 24 of the bill, companies involved in the creation of violent games would no longer be able to claim a valuable research and development tax credit. Ironically, the bill itself describes this credit as a benefit that gives "American manufacturers the certainty they need to compete against their foreign competition who have long had permanent R&D incentives." Apparently American game developers don't merit such competitive advantages.

Now it's important to remember that this bill, a product of the GOP controlled House Committee on Ways and Means, isn't yet official law. It still needs to run the ringer of being passed and could wind up changing during that process. That being said, even if it were signed into law I have a feeling it wouldn't go unchallenged. For one, the definition of "violent" as its presented is very vague. More than that though, video games are protected speech under the first amendment and you could make a solid argument that this bill is essentially punishing companies for exercising their free speech. We will, of course, be watching this to see how it pans out.