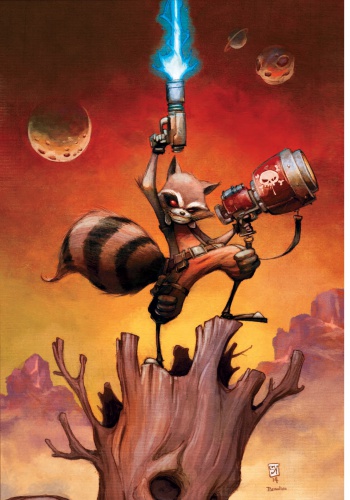 Guardians of the Galaxy's impending film release has prompted a standalone spin-off series starring its most memorable character.

By now, most of you have seen the fantastic looking Guardians of the Galaxy trailer and are becoming suitably excited for its impending release. All of the characters seem capable of carrying their own screen time, but if I had to hazard a guess, I'd say the most popular of the bunch will be one rocket-wielding raccoon by the name of... well, Rocket Raccoon. You can bet that's what Marvel's expecting too, which is why this July, Rocket Raccoon will get a standalone comic book series written and drawn by The Wonderful Wizard of Oz's Skottie Young.

"I like any of the humorous characters, any of the ones I can have fun with," Young told MTV earlier this week. "I think it's going to have a connection to that nostalgic feeling for Looney Tunes, that old animated flavor where everything wasn't squeaky clean, you know? Daffy Duck would get his bill blasted off with double barrel shotguns... That's what I grew up watching, and being able to play around with that in this hyper-superhero intergalactic universe will be a lot of fun."

Rocket Raccoon will be Young's first comic book project where he takes on both writing and art credits, but his animated drawing style should make an interesting fit for the character. Based on some initial concept artwork, Guardians of the Galaxy's Groot will also be a central character, possibly as a partner to Rocket Raccoon and a foil to his antics. Young's comments also imply that other Marvel figures are making guest appearances, although whether that includes Earth-bound superheroes remains to be seen.