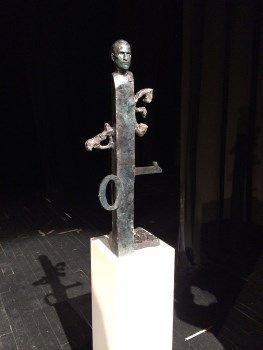 Serbian sculptor Dragan Radenovic unveiled his new statue of Steve Jobs yesterday, the day that would have been Jobs' 59th birthday, and you know what? I can't even put words to it. I honestly do not know what to say, except that I am seriously freaked out by it.

It appears to stand about three feet tall, with what is presumably Jobs' head perched atop a squared-off pillar. A pair of Cyrillic letters whose meaning eludes me pokes out above a 1 and a 0 representing the binary system that makes computers do their magic, although those of you with more vivid imaginations may see a couple of those characters in a more anatomical light, if you know what I mean. Yeah, you know what I mean.

The amazing thing about this godawful monstrosity (and let's not mince words here, this thing is horrific) is that it was chosen as the winner of a competition with more than 10,000 entries, and Jony Ive, Apple's senior vice president of design, reportedly really likes it. That means there's a good chance it's going to get even worse: This piece is just a scale mock-up and if the design is approved by the appropriate great minds, a full-size version standing between ten and 16 feet tall will be built and placed on Apple's campus. Jobsman Be Praised!