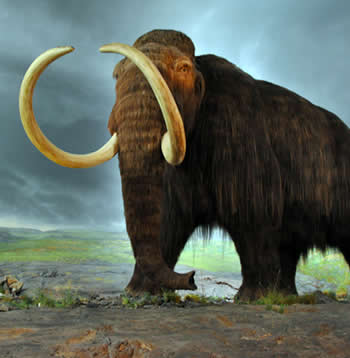 A team of scientists from the Revive & Restore project are working to resurrect the woolly mammoth.

Until very recently, resurrecting an extinct species has been the stuff of sci-fi novels and monster movies. But a team of researchers from the The Long Now Foundation in San Francisco, California is on the verge of making this scientific wet dream a reality.

The Revive & Restore project has one very specific goal: the rescue of endangered and extinct animals. Right now, the team is focused on resurrecting the Passenger Pigeon, a species that was extinguished by overexploitation in 1914. But Revive & Restore is already working to pull the woolly mammoth out of extinction.

In an interview with the New York times, Stewart Brand, co-founder of Revive & Restore, explained that resurrecting the mammoth isn't just a publicity stunt. "We've framed it in terms of conservation," he said. "We're bringing back the mammoth to restore the steppe in the Arctic. One or two mammoths is not a success. 100,000 mammoths is a success."

Several hurdles will need to be vaulted before the San Diego Zoo can build a Mammoth exhibit, though. The science of cloning is advancing quickly, but modern techniques don't have enough horsepower to handle the mammoth. So, the Revive & Restore crew may have to recuse a few other species first.

Also, and this is that part that makes mammoth cloning seem significantly less cool, a perfectly cloned mammoth will never be possible. In order to clone an animal, scientists splice genetic material into an existing egg. Unfortunately, no mammoth eggs exist (nor will they ever), which means that scientists will need to use a species that's closely related: the Asian-elephant.

What emerges, then, will be a mammoth/Asian-elephant hybrid. Researchers will attempt to refine the process so that the clone's DNA closely resembles the extinct species, but we'll never really know how much of the mammoth has been lost in the process.