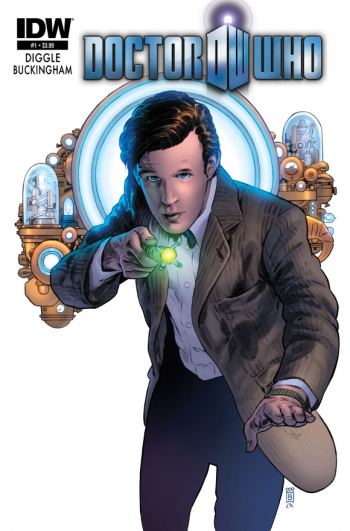 To the average person, copyright and licensing agreements are things you might vaguely think about while installing computer software, but for international publishers it holds massive consequences. Take the Doctor Who comic book, which is leaving IDW for the British-based Titan Comics in time for Peter Capaldi's debut as the Doctor. From all appearances, the decision makes sense: Titan Comics is a British company, Doctor Who is a British series, and British creators will be hired to tell all-new British stories. Unfortunately, license agreements are even more wibbly wobbly than the timeline itself, because Titan Comics cannot legally distribute Doctor Who books to British comic shops.

The problem, which existed even when IDW controlled the Doctor Who license, is that The Doctor Who Magazine holds comic book distribution rights. Rumors had been circulating that Titan Comics would buy the publication, neatly circumventing the matter, but according to BBC Worldwide this hasn't happened. That means Titan Comics will have to distribute Doctor Who to North American bookstores, who in turn can sell the books to British bookstores. It's like watching the effects of a paradox from outside of time, but you don't want to touch it just in case it destroys the universe.

Sure, this is pretty much what British shops needed to do when IDW ran the show, but IDW is based out of San Diego; racking up shipping charges is a little more understandable in that context. At the end of the day, British Doctor Who fans will still get their Doctor Who comics, but delays and mark-ups will remain an issue. Sadly, this is one problem the Doctor can't just Sonic Screwdriver his way out of, at least not yet.