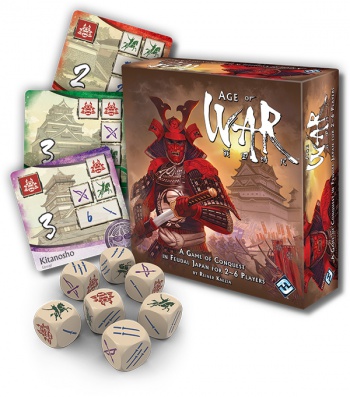 Risk Express re-theme Age of War by Reiner Knizia is set to release in the second quarter of 2014.

Fantasy Flight Games, publisher of the Battlestar Galactica and Lord of the Rings board games, have announced a new game by designer Reiner Knizia: Age of War, a fast-paced dice game for two to six players.

The game is similar to Risk - in fact, Age of War is a feudal Japanese re-theme of Knizia's Risk Express. Players take on the role of competing daimyos vying to unite Japan under one banner by sending armies to conquer castles. Dice rolls determine success or failure in each attack, and once all castles are conquered, the game ends and points are tallied to determine a victor. But while a game of Risk can take a couple of hours - or, if you're like me, a couple of weeks - a game of Age of War is over in about 20 minutes.

With over 500 published games under his belt, Reiner Knizia is something of a legend in the board game world. His career has been highlighted by numerous national and international awards, countless inclusions in top games lists, as well as a spot in the Gaming Hall of Fame at the 2002 Origins Game Fair.