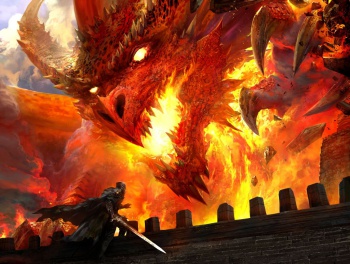 Update 3/3/2014, 2:25 PM EST: Wizards of the Coast has returned an official no comment, saying they had nothing to share at this time. That likely means the release dates are real ones.

Original Story: It's no big secret that Wizards of the Coast is working on the new edition of Dungeons & Dragons to release this year, and courtesy of book retailer Barnes & Noble, we've got a look at the dates: A starter set will release for $19.99 on July 15th, with the Player's Handbook releasing a month later on August 19 for $49.95. The starter set is the big news here, as it was already a given that Wizards would release the big new edition a a few days after it premieres at Gen Con. The starter set will likely, if we use the release of D&D's Fourth Edition as an example, be a complete adventure containing premade characters and an abridged version of the rules - similar to what designer Mike Mearls outlines here.

There's no word yet on whether or not the starter set will be tied into Wizards' Multimedia Tyranny of Dragons event, but given that Wizards says the event will launch "this summer" and the starter set releases in July, it's looking likely - which would mean that the default starter setting for Dungeons & Dragons would be the Forgotten Realms.

This may mean that the relatively final version of the text is heading to printers soon, which makes sense given designer Mike Mearls' recent detailing of various cut game features. This may also mean we know a real release date for WizKids' new line of official Dungeons & Dragons Miniatures, as those are intended to go along with the Tyranny of Dragons event.

We've reached out to Wizards of the Coast for comment, but have as yet received no response. We'll update as soon as we know more.

Here are the pages for the Starter Set and the Player's Handbook at Barnes & Noble. We've included screenshots below in case the product pages get taken down.