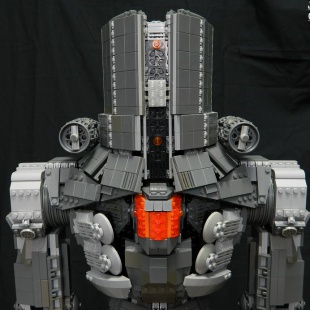 Pacific Rim was easily one of 2013's most enjoyable films and it's not all that hard to pin down why. Put succinctly, when the core concept of your film is giant robots pummeling skyscraper-sized monsters you're immediately scoring some major points on the awesome scale. It didn't hurt, of course, that the movie's mecha were some of the coolest in recent memory. Gipsy Danger, Crimson Typhoon, Striker Eureka; they all looked the part of slick, powerful fighting machines perfect for the task of beating giant monsters into submission.

And then there's Cherno Alpha. The oldest Jaeger featured in the film, Cherno Alpha is slow, bulky and cumbersome. That being the case, I'd be lying if I were to say it wasn't my favorite of Pacific Rim's robot roster. Sure, it lacks the shine and polish of the other Jaegirs, but in a lot of ways that's its charm. It's like the Serenity in Firefly; it just wouldn't be as lovable if it didn't have that past-its-prime look.

Luckily for me, I'm not alone in my preference for the little Russian Jaeger that could. LEGO artist Jason Corlett, for instance, recently completely a build project transforming Cherno Alpha into a custom model nearly three feet in height. The build itself involved "no-less than 5,000 piece" and took "roughly 70 hours to build." All in all, it's a nice a model that does a great job of emulating the design of the movie. Check it out and let us know what you think. For my part, I'm hoping that Corlett decides to continue with even more Jaeger models.