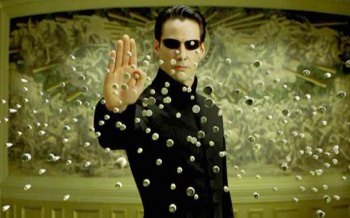 The Wachowski siblings have allegedly started writing the script for a new Matrix trilogy for Warner Bros.

Are you ready to take the Red Pill again and jump back into the Matrix? According to Latino Review, the Wachowski siblings have already started the writing process for an all-new Matrix trilogy, with early treatments and outlines already sent to Warner Bros. studio. However, it's not known at this point if the duo will direct any of the films -- assuming this rumor comes to pass, of course.

While the first Matrix trilogy ended with Keanu Reeves' character, Neo, in a questionable state whether he's still alive or dead, it's unclear at this time whether Neo or any of the old characters will take part in this rumored new set of films. One of the early outlines is said to be about the "birth of the Matrix," which would definitely predate Neo since he's not the first "The One," according to the film's "Architect."

For those not familiar -- or weren't old enough -- to have seen the Matrix films, it's a sci-fi action trilogy that heavily borrowed fighting and gun fight choreography from Asian films. The first movie, The Matrix, which was released back in 1999, was widely well-received and introduced iconic characters, Neo (Reeves) and Agent Smith (Hugo Weaving) to the world.

Keep in mind this is still a rumor until Warner Bros. confirms or denies it, or we see leaked set pictures and such. If ever, don't be surprised if we're asked to choose whether to take the Red or Blue Pill once again.