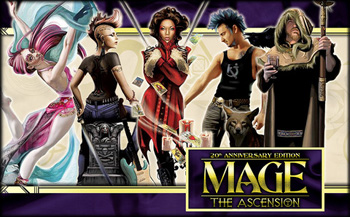 It has been 20 years since the first publication of Mage: The Ascension, and Onyx Path Publishing wants to celebrate this anniversary with the release of a special edition. To that end, the team has just launched a Kickstarter campaign that has already blown past its $70,000 funding goal with over $100,000 raised.

The deluxe edition will be leather-bound, gold-edged, and full-color, and feature a silk bookmark and an embossed cover. The contents consolidate material from the first, second, and revised editions, as well as Sorcerer's Crusade and Dark Ages, and include both new and updated material, as well as simplified and clarified rules.

In Mage: The Ascension, players take on the role mages - but these are not your typical fantasy wizards. Set in the supernatural horror World of Darkness universe, Mage leans towards the metaphysical and mystic side of magic and even touches upon philosophy, science and religion.

This is the team's 10th Kickstarter campaign, having raised over $1,700,000 from the platform in the past. Two stretch goals have already been reached, and a third, at $120,000, will surely follow shortly. If that third stretch goal is reached, all backers who pledged $35 or more will receive a 60,000 word quickstarter adventure PDF.