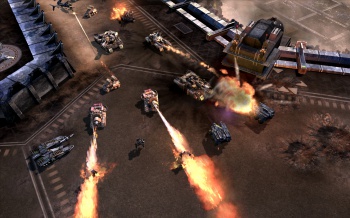 It looks like this could be the end for End of Nations.

Trion Worlds didn't come right out and say it, but it looks like the bell may have finally been rung on End of Nations. The End of Nations website has very suddenly and unceremoniously disappeared, and all mention of it (aside from a handful of old press releases, as far as I can tell) has been scrubbed from the Trion Worlds site. Speaking to GameFront, Trion PR Manager Anais Gragueb said nothing to suggest that better news is on the way.

"As we informed EON's community last fall, internal development on End of Nations was put on hold in late 2013 while we evaluated potential paths forward for the title," she said. "We're currently focusing the company's energy and creativity on Rift, Defiance, Trove, ArcheAge, and some new projects we'll be revealing soon."

If it is the end of the line, nobody will be able to say they didn't see it coming. A planned open beta was postponed indefinitely in late 2012, after which pre-purchases of the game were refunded; Trion pulled the game from developer Petroglyph shortly thereafter, sparking layoffs, and while it resurfaced last summer as a MOBA, nothing has been said about it since.