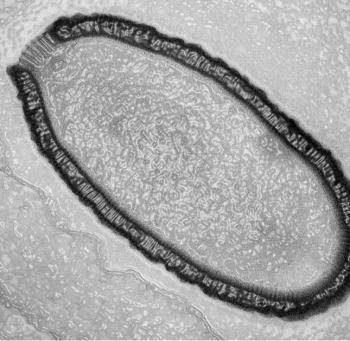 There's more where that came from, says Professor Jean-Michel Claverie.

The pathogen Pithovirus sibericum lay dormant in the Siberian permafrost for 30,000 years, but became infectious as soon as it thawed out, say French researchers in a National Academy of Sciences study. "This is the first time we've seen a virus that's still infectious after this length of time," says Professor Jean-Michel Claverie of the University of Aix-Marseille, and he warns that exposing what lies beneath the permafrost is "a recipe for disaster."

Pithovirus sibericum destroys single-cell organisms. It invades the cell, multiplies and finally eliminates its host, but it is not capable of infecting a human. That was the first thing the team verified, after it discovered that the virus was active. It's called a giant virus because, unlike others of its kind, this one can be seen under a microscope. Pithovirus sibericum, at 1.5 micrometers, is the biggest giant virus known to man.

It lasted as long as it has because the permafrost is an excellent preserver; as an environment it lacks oxygen, is very dark, and very cold. The National Academy of Sciences study that discusses this event can be found here.

While the risk to humans from Pithovirus sibericum is nil, the team led by Claverie and Research Director Chantal Abergel believes there is a serious concern. After all, Pithovirus sibericum is still viable after 30,000 years; what else might also be hidden in the permafrost? Claverie describes it as "a non-zero probability that the pathogenic microbes that bothered [ancient human populations] could be revived."

"If you start having industrial explorations, people will start to move around the deep permafrost layers. Through mining and drilling, those old layers will be penetrated and this is where the danger is coming from." It doesn't help that, since the 1970s, the permafrost has reduced in size and thickness, and thanks to climate change is likely to reduce still further.

Though there are many thousands of viruses out there, the proportion of those viruses that can affect mammals, let alone humans, is vanishingly small. The chance that one particular virus which infected, say, Neanderthal man, and which could therefore affect us, lies out under the Siberian ice waiting to be unearthed is incredibly unlikely. However it would seem that incredibly unlikely is not quite the same thing as impossible, and Pithovirus sibericum demonstrates just how far from impossible it may be.

"At least a stock of vaccine should be kept, just in case," says Claverie and Abergel.