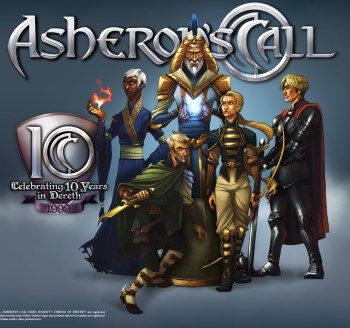 With development of the 15-year-old MMO finally coming to an end, Turbine says it hopes to allow players to run their own Asheron's Call servers.

15 years is an awfully good run for an MMO, but all good things must come to an end and it looks like the clock is ticking down on the venerable Asheron's Call. In a message posted late last month, developer Turbine revealed that future updates to the game will be limited to critical bug fixes, maintenance and "perhaps balance iterations" of the content introduced in the February update.

Turbine insisted that it has no plans to close down the game, but the writing is on the wall. The good news is that the studio plans to make both Asheron's Call and Asheron's Call 2 free to everyone "as a gift to our loyal players," and is also looking into ways to extend its lifespan beyond the end of official Turbine support.

"We have been working within the company to start an initiative sometime near the end of the year to allow players to run their own Asheron's Call servers," Turbine wrote.

Unfortunately, running a server is not a "user friendly experience," so part of that initiative includes creating a community among "tech savvy enthusiasts" to distribute and support the necessary tools to people who want to take on the job. "If that works out we can look into releasing tools and data files that would allow players to modify game data and create alternate content for their own Asheron's Call games," it added.

Turbine revealed last month that it had laid off an undisclosed number of employees, saying the cuts were necessary to ensure the company is "structured in a way that reflects the current and coming marketplace."