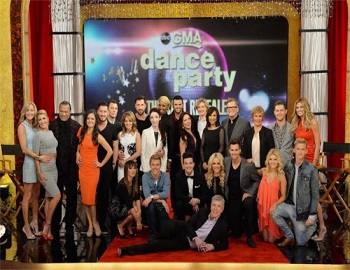 Star Wars actor Billy Dee Williams will be performing in the latest season of ABC's Dancing With the Stars.

Remember when Star Wars Kinect came out and everyone rolled their eyes at its dance game? How absolutely ridiculous, we all thought. Well, it would seem that the joke was on us because Star Wars Kinect was apparently just a Force premonition of the future. We say this because ABC has announced that Lando Calrissian himself will be joining the next season of Dancing With the Stars.

Actor Billy Dee Williams, who played the beloved character in the original trilogy, will be performing in the latest season of the dance competition beginning on Monday, March 17th. He'll be performing with dancer Emma Slater who has been with the show since 2012. Williams will be competing against other celebrities including Wonder Years alumni Danica McKellar, The Price is Right host Drew Cary and double-amputee snowboarder Amy Purdy.

While William's presence will primarily serve as a chance for the actor to demonstrate that he's the best dancer in the galaxy, we can't help but hope that this cold also be an opportunity for ABC's owners at Disney to maybe slip in a few Star Wars announcements. For instance, while the rest of the original cast has been confirmed for Episode VII, William's involvement is currently just a rumor. How convenient would it be, in turn, for him to be voted off the show and say something like "that's alright because I'm dancing right over to the new Star Wars movie." It would, of course, be about a thousand times more suave seeing as he's Lando and all, but you get what we're driving at here.