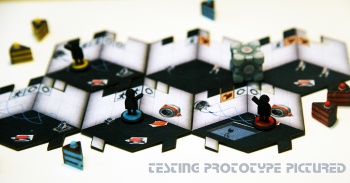 The Portal board game by Valve and Cryptozoic will be a competitive experience in which players assume a role similar to GLaDOS.

More details have emerged for the Portal board game announced last week. Speaking with Polygon, Valve revealed the competitive nature of the game, which involves killing off test subjects à la GLaDOS.

Currently operating under the working title Portal: Uncooperative Cake Acquisition Game, the strategy game sees two to four players take on the role of Aperture Science overseers guiding test subjects through tiles of test chambers. According to Valve's Jeep Barnett, the game will be a competitive experience - a player in the lead can win by eliminating either his opponents' test subjects or his own.

"From the very first prototype, the core mechanic struck us as unique and compelling," said Barnett. "As it evolved, it survived our rigorous process of external playtesting and iteration." He explained that while Valve has worked on other board game ideas, "this is the first that we're sure meets the quality bar that customers expect from Valve."

Valve effectively brought Cryptozoic a complete tabletop game idea, which only required some fine-tuning and polish. The developers of Portal and Portal 2 started work on the board game back in 2012, with a small team rotating personnel to devote to the project. "In general there's been two to three people actively working on it at a time, but in total about a dozen people have been involved," said Barnett.

Cryptozoic told Polygon that the plan is to release the game in October, but noted that "manufacturing sometimes has delays."

While this is the first board game Valve will release, it may not be the last. "If this release goes well and gamers say they want more, we'll likely pursue more gameplay in the tabletop space," said Barnett.