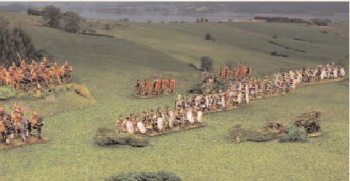 While Osprey Publishing has released a few miniature wargaming titles in the past, the military history publishing company has recently announced the opening of a dedicated games division. Past titles Field of Glory, Force on Force, and Bolt Action have paved the way for this venture, establishing Osprey as a big name in wargaming.

But miniature wargaming isn't all Osprey seeks to do. The publisher does wish to expand its existing product line, but also enter the market of board and card games and bring with it its reputation for high-quality artwork. In a press release, long-time gamer and Games Manager for the new Osprey Games division, Philip Smith, said that he already has "some very exciting projects on the drawing board."

Published in 2008, Field of Glory was Osprey's first released game. Best enjoyed with two players but able to support up to four, the game puts you in command of a medieval army of approximately 10-15 battle groups with the key objective of outmaneuvering your opponent and concentrating your forces at critical points in the battle. 2009's Force on Force introduced modern warfare, while the World War II era-Bolt Action was released in 2012.