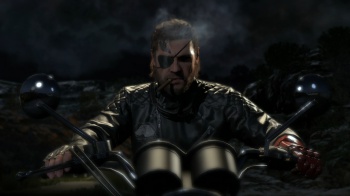 Hideo Kojima claims The Phantom Pain has "the risk" that gamers won't be able to finish it, since it's "more than 200x bigger" than Ground Zeroes

Following the controversy that Metal Gear Solid V: Ground Zeroes will be just a two-hour game, it seems Metal Gear Solid fans won't need to worry about the length for MGSV's main course -- The Phantom Pain, at least, if series creator Hideo Kojima is to be believed. According to the game director, for The Phantom Pain, he's worried "players will start complaining that they can't clear the game, [it's] too big to clear." Kojima adds, "The Phantom Pain has the risk that people won't be able to finish the story as it will be "more than 200x bigger than Ground Zeroes." Unfortunately, he couldn't disclose just how many missions The Phantom Pain will have, only stating, "but we'll have a lot of missions in there."

With Kojima defending Ground Zeroes' length by citing its re-playability and "freedom of approach" as counterarguments to critics, let's hope The Phantom Pain's 200x increase means that even played without side-missions, it will take longer than most movies to complete.