Close-to-metal programming, mobile support are on tap for the conference. 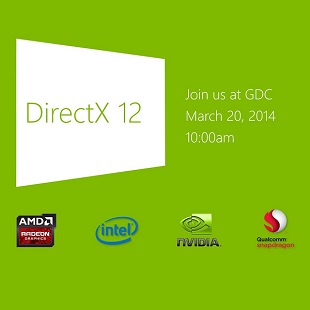 DirectX 11 had its time in the sun, but the aging, Windows 7-tied API will soon be put out to pasture. According to Microsoft, DirectX 12 will be detailed at GDC 2014 later this month.

The next DirectX has been confirmed by a new Twitter account controlled by Microsoft, as well as a teaser page detailing the reveal. Those details are sparse, but the announcement will include the "Big Four" chip partners -- Intel, Nvidia, AMD, and Qualcomm.

Little is known about the reveal, but there two sessions on the GDC schedule that will detail the future of DirectX/Direct3D. "DirectX: Evolving Microsoft's Graphics Platform," will be led by Anuj Gosalia (Development Manager, Windows Graphics) on Thursday, March 20th, and the second session, "DirectX: Direct3D Futures," will be presented by Max McMullen (Development Lead, Windows Graphics) later on the same day.

It's unknown when DirectX 12 will be avaiable, although some believe it will be tied to a new Windows release, possibly Windows 9. Regardless, it promises to be a close-to-the-metal API, much like AMD's new Mantle platform.