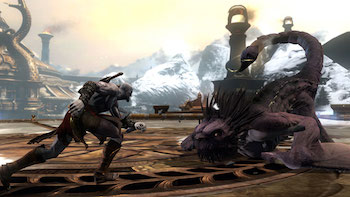 The studio, which still employs about 200 after last week's layoffs, will continue to release triple-A, retail games, according to Sony.

Following last week's announcement of layoffs at Sony Santa Monica, Sony has spoken with IGN in an attempt to clarify what happened at the God of War studio.

"There's not a single business on the planet where every single project that is started is a success. And that's just what happened here. So sometimes, high profile projects or studios need a reboot, and that's what's happening here," said Scott Rohde, head of internal software development for the PlayStation brand. "Santa Monica will always be a hugely important part of our global family of studios. It's still a huge studio that's right up there around 200 people, even after the recent layoffs ... You guys are just going to have to be patient and wait for us to announce what's coming next from Santa Monica."

"We're always evaluating the business, and we're always thinking about what's going to be the best thing," Rohde said. "PlayStation and Worldwide Studios has a pretty unique structure that really encourages creativity and exploration. And, of course, within that framework, not every title can be a success."