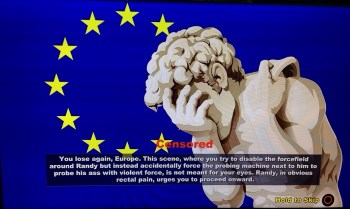 South Park: The Stick of Truth released earlier this month and, as expected, the game was filled to the brim with crude humor and irreverence. That said, not every gamer has been privy to all of the game's hilarious content. While the it hit stores uncensored in the United States, versions released in Europe and Australia had some of the game's more controversial bits cut out and replaced by text descriptors. Commenting on the game recently, South Park creators Matt Stone and Tray Parker called this a "double standard" compared to what they can put on television.

"It does feel like a double standard," commented Stone, who said that TV, especially in recent years, has become "crazily more permissive." Comparatively, Stone says that he was told flat-out that foreign markets would give them a harder time about The Stick of Truth. "I was told that Australia has different standards [for video games]," he said. "They have their own ratings system, as does Europe, so I was told that we had to submit it for ratings and they come back and tell you this will pass, this won't."

These different standards, of course, led to the censored versions of the game, something that Stone has made peace with to an extent. "As long as we could make a joke out of the fact that they made us cut [content], that was fine." Such compromises are no stranger to Stone and Parker who, in the past, have been forced into similar situations by Comedy Central. That said, Stone expressed that he can perhaps understand why controversial content in video games sometimes makes people uncomfortable. "There is an interactiveness that makes it different. In movies and television you can do stuff that's morally grey very easily... in a video game there's a reason why everything is a Nazi, zombie, or alien - these are pretty clear moral choices," he said. "There are things that make people more uncomfortable in an interactive world, definitely. But that said, what we had in the game, we could have shown that on TV pretty easily, especially now."