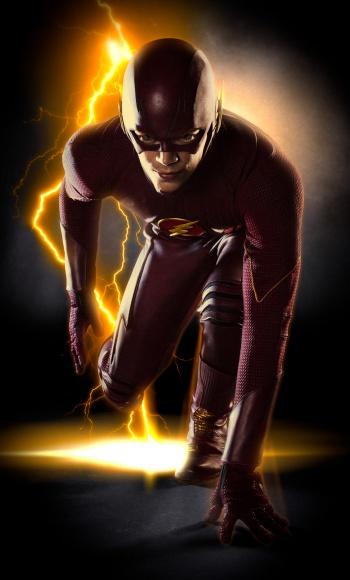 The Flash's costume teases superheroism over brooding realism, which implies a unique tone for The CW's latest pilot.

In recent years, it's seemed like live-action superhero shows have an aversion to giving their characters superhero costumes. Arrow's Oliver Queen wears a far more practical outfit than his original comic book counterpart, and it took Smallville a decade to finally put Tom Welling in a Superman suit. So when Arrow's spin-off pilot The Flash actually gives its title character an honest-to-God superhero costume, you can be pretty certain that the times are a-changing.

The Flash tells the story of DC Comics' resident speedster Barry Allen, and will be set in the same universe as The CW's Arrow. Allen (played by Grant Gustin) already made his debut in Arrow's second season, although not in a superpowered capacity. The CW is saving his actual superhero origin for The Flash's pilot, after which I assume Gustin and Arrow's Stephen Amell can do back-and-forth guest appearances.

I've never personally seen an episode of Arrow to speak of its quality, but the internet consensus seems largely positive. That's promising enough, but The Flash also has DC's Chief Creative Officer Geoff Johns on board as executive producer, showing a high level of support from DC Comics itself. That being said, only The Flash's pilot has been greenlit so far, so we'll have to wait and see if it succeeds or goes the way of the Wonder Woman series.