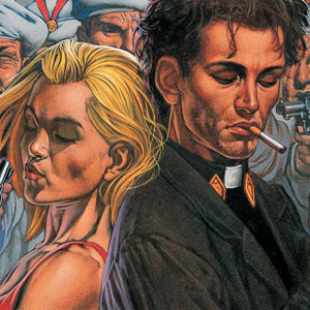 Writer Evan Goldberg says that AMC's adaptation of Preacher will "stay as true to the comic as we can."

Last month AMC revealed that it will be creating a series based on the comic series Preacher. Many fans of the dark, violent and frequently blasphemous book were immediately puzzled as to how the network, which also produced Breaking Bad and The Walking Dead, could ever faithfully recreate the book's controversial story for cable audiences. Speaking about the series recently however, writer Evan Goldberg promised that the show's creative team is aiming to be as accurate to the source material as possible.

"We just had a meeting with AMC and Garth Ennis, who's the writer, and we all kind of seemed to agree that we're gonna stay as true to the comic as we can," said Goldberg. Even so, he admitted that some alterations would be necessary. "We need to change some stuff but we're not gonna change much, I hope. We're just gonna do a little more of the preamble instead of doing flashbacks and restructure how we dole out the information a little, but we're gonna [do the] same characters, same story, same ending."

Whatever compromises the show has to make, Goldberg believes that the end product will be leagues better than the movie version that Hollywood has apparently been trying to make for the last decade. "Everyone else tried to make it a movie and it shouldn't be a movie," he said. "It's just too big." According to Goldberg, the proper way to adapt Preacher, of course, is to make it "an AMC show." We have high hopes but time will have to tell if he's right.