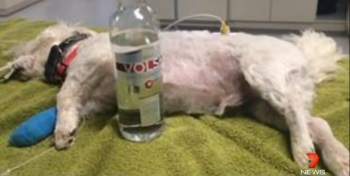 Veterinarians in Australia quickly determined that the only way to save Charlie from poisoning was to get him out-of-his-mind drunk.

A Maltese terrier named Charlie was given just hours to live after vets in Melbourne, Australia determined that he was suffering from ethylene glycol poisoning, the result of licking antifreeze off the floor of his owner's garage. His kidneys were shutting down and death seemed imminent, but luckily for him, that's the kind of trouble they know how to deal with in the Land Down Under.

"In Australia, the only antidote we have is alcohol," the Animal Accident and Emergency Hospital wrote on its blog, explaining how the people of the nation deal with their many day-to-day travails. And as it turns out, it's also a way to counteract ethylene glycol poisoning! "Alcohol alters the chemical reaction and stops the kidney failure from occurring. It is important that we treat these pets as soon as possible after ingestion. For most pets, a couple of licks of anti-freeze is enough to cause problems."

Vets inserted a tube through Charlie's nose into his stomach and spent the next 48 hours feeding him vodka, which is apparently a boozehound favorite. When all was said and done, he'd pounded back 700 ml of vodka, the equivalent of 22 "standard drinks," according to the Australian government's Department of Health.

"For the whole weekend, Charlie had a huge party with us in the Pet ICU," the blog says. "The good news is that Charlie has recovered and is not showing signs of kidney failure."

Even though he was cured, he still went home in pretty rough shape. "He was stumbling around, I'd go to pat him and he'd push me away like a normal drunk person. He was vomiting a little, whining like a drunk," Charlie's owner, Jacinta Rosewarne, told the Herald Sun. "I thought it was hilarious... It was distressing but funny at the same time."