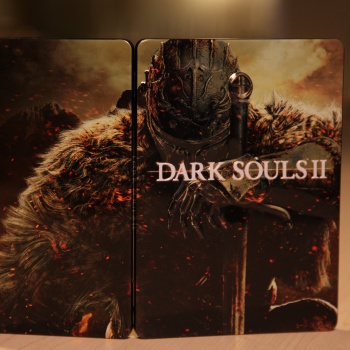 So Dark Souls II came out this week, though sadly you'll have to wait until April 25th if you want to play it on the PC. It certainly leaves me in a awkward position since I'd greatly prefer it on the PC for the mods and tweaks, but I really want to keep playing.

If you've been a long time fan of the Souls series like I have, chances are that this collector's edition might have caught your fancy. If you want a closer look at what's inside, there's a gallery of photos below, but here's what you'll get in the box.

For the most part, it's pretty standard fare, but it's all good quality. The figurine has a great level of detail on it, though the base of it looks like an afterthought compared to detail work done of the armor. It would still look well at home on a desk or shelf along with other various gaming paraphernalia. The cloth map feels well made, and won't likely fray. It is however more decorative than practical. The soundtrack and art book are just about what you'd expect. The music is good, a mix of bombastic tracks and softer melodic fare, but you may want to hold off on paging through the art book if you're the sort who wants to avoid all spoilers.

Honestly, even if the other goodies didn't really do anything for you, I'd highly recommend picking up the Black Armor Edition, which is sold separately, just for that awesome tin case. The picture probably does no justice to the raising that's on the front. It's really gorgeous looking. Though you'd still want to ensure that the soundtrack and that was worth the $20 hike for you.

The full Collector's Edition will set you back $120 and the Black Armor Edition is $80.