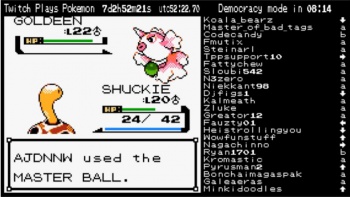 We caught up with the mastermind behind Twitch Plays Pokemon to ask him about his social experiment.

The Escapist: Thanks again for agreeing to do this interview. First up, how did you get the idea for the original Twitch Plays Pokemon? I understand that you picked Pokemon specifically because only games with a turn-based nature would be possible to use with the system, but what made you decide to run the "experiment" in the first place?

TPP: I was inspired by SaltyBet, another stream on Twitch where players could bet fake money on the outcome of AI-played fighting game matches. I wanted to make my own automated stream and I decided on Pokemon because I perceived it as low hanging fruit, its gameplay was simple enough to where inputting buttons through chat could make for an engaging experience. I was considering many other games but they needed complex systems for interfacing with the game, I didn't want to waste time on something that might be fundamentally unappealing.

The Escapist: Did you anticipate the level of popularity you received? I believe at peak, the stream was hovering around 40k players. How did you feel when the stream skyrocketed, and how did it affect your life?

TPP: I was very stressed when it became super popular, I wasn't sure what the implications were going to be but after a few days I calmed down. My life already involved the administration of servers so having one extra service to maintain isn't that big of a change for me.

The Escapist: I noticed that at first, you only had subscriptions, but now, the stream has advertisements. What made you decide to go down this route? How much money would you estimate to have made from the stream?

TPP: No advertisements interrupting gameplay has been the rule I've always followed but there has always been pre-rolls (I have no way to disable those), Twitch wasn't made for 24/7 streams so there's always going to be those moments in between streaming sessions where when the stream starts back up a pre-roll will play, I usually try to do this manually and pause the game while it happens but sometimes connectivity issues force the stream to restart causing a pre-roll to appear during gameplay. I contractually can't reveal any information about the performance of the advertising, sorry.

The Escapist: Lastly, what's next for Twitch Plays Pokemon? Popularity is certainly waning with the Crystal play through (at least compared to Red). Do you aim to continue on to Generation III, will you switch to a new game entirely, or perhaps something completely different?

TPP: As I see it at the moment I'm going to continue with Pokemon Emerald after Crystal is finished. I'm planning on making a slight modification to the input system too. I'm giving consideration to more elaborate changes like using a randomizer or modifying the game to make it more punishing but I don't have anything planned.

Be sure to tune in to the Twitch Plays Pokemon stream right here, and check out our weekly update to see what they've been up to.