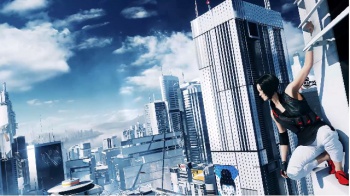 According to someone who has seen footage of Mirror's Edge 2 in development, the title's open world environment will be a persistent "always online" component and is targeted for a 2016 release.

Announced at last year's E3, DICE's Mirror's Edge reboot -- more commonly known as Mirror's Edge 2 -- has been kept out of the spotlight with details being kept close to the studio's chest. Fortunately, Australian video game site Rocket Chainsaw has allegedly seen video content of the parkour action game and has spilled the beans on what they saw. According to the site, the footage we saw last year was all in real-time, and unscripted. What's more, the title's open world environment will be a persistent "always online" component, that's also being made as a "multiplayer playground" where players can drop-in and drop-out seamlessly. You can read up on the details leaked -- which was verified by a NeoGAF mod due to the poster's track record -- below.

- Faking nothing, the E3 2013 Mirror's Edge 2 teaser was indeed entirely real time and generally unscripted, including the combat systems. Rocket Chainsaw has now seen both in motion in test environments, and they match up, graphically and mechanically.

- Target platforms are Xbox One, PlayStation 4, PC, and Mac.

- Reiterating statements from DICE, Mirror's Edge 2 is a total reboot.

- Core goal of the reboot is to create an open world, living breathing city for you to explore.

- Part of this open world environment includes a persistent, "always online" component. The open world is considered a multiplayer "playground" where other plays can drop-in/drop-out seamlessly, freely choosing their level of interaction with other players and the game world. A comparison to Journey's online feature was given as the closest example.

- Other general multiplayer components include co-op and competitive modes, such as time trials

- Rebooting the universe means new enemies. Mirror's Edge 2 will include many AI opponents, some on equal footing to Faith. Among these are the standard cannon fodder Protectors, melee combat expert Sentinels, and armoured gun wielding Enforcers. We've been told that Faith does not have guns.

- DICE has taken on a lot of feedback from Mirror's Edge in shaping the combat system for Mirror's Edge 2. Heavy revisions have shaped the combat away from useless gunplay and one button combats (like the nut-punch) to a deeper system that emphasises speed and fluidity. Environment interaction is also a key feature of the combat system, Faith able to push, punch, and kick enemies out of the way, over ledges, tables, and railings. These physics driven interactions are combined with 1-2-3 punch/kick style combos, wall running, flips, and other martial arts moves, as well as brief grapples. Occasionally a third person take-down move will be used when an enemy is beaten, and "adaptive slow-motion" is used vary sparingly, mostly just to highlight cool sequences, like the E3 2013 trailer face punch. Rocket Chainsaw has seen all of these combat functions performed in real time, without scripting.

- While DICE are committed to providing a deeper combat system, melee combat is not the single focus of Mirror's Edge 2. DICE does not consider Mirror's Edge 2 as a brawler, but instead a racing game at heart. For the development team, the focus is on creating a game all about parkour: speed, fluidity, and mastery of your environment. Even these changes to the combat system are being done to prevent issues with Mirror's Edge where players would have a stretch of parkour with intermittent pace breaking stops to fight an opponent. DICE wishes to seamlessly integrate encounters and the combat system into the feeling of speed and parkour mastery, so players even while fighting are still on the move, making progress, and interacting with their environment.

- Its target release date is in 2016. Sorry kids. Fingers crossed it comes around earlier!

That last bit wasn't a typo. Mirror's Edge 2 is supposedly set for a 2016 release, which explains why EA hasn't been promoting it as much. When asked for a statement, an EA rep gave the standard, "We do not comment on rumors and speculation."

So, this Mirror's Edge reboot -- which we'll still call Mirror's Edge 2 until EA gives us a proper title -- will be an open-world, always-online parkour game with a revamped combat system? If true, then count me in. But do keep in mind that none of the details listed have been verified by DICE or EA, so don't be surprised if some things change.

Are you liking what you've read so far? What other improvements can DICE make to make Faith's PS4 and Xbox One debut a success?