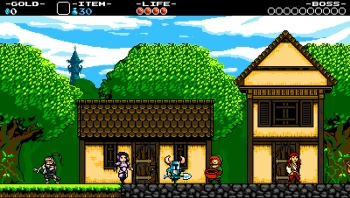 Yacht Club Games announced yesterday that Shovel Knight will be delayed and will miss its planned March 31 release date. An update on the Kickstarter page for Shovel Knight states, "Shovel Knight will be missing March 31 by a few weeks to make sure it's a world class experience, and can release on all platforms simultaneously. This isn't a major delay, or a long one; it's simply a stretch of time to get everything polished and aligned." The Kickstarter campaign had originally targeted a September 2013 release for the game, but the developers revised that estimate to winter 2014. Yacht Club Games announced the March 31 release date with trailer on January 22.

Major development on the game is complete, but Yacht Club Games says, "There are still some external factors, like submission preparation, which need a little bit more breathing room before the game goes live." A new date will be announced once the release date is confirmed with Nintendo and Steam. Shovel Knight will launch simultaneously on Wii U, 3DS, PC, Mac, and Linux. Pre-orders are available for PC, Mac, and Linux at $15 for the game.

Yacht Club Games launched the Kickstarter campaign to fund Shovel Knight on March 14, 2013 with a goal of $75,000. The fundraising campaign ended with over four times its goal, raising $311,502 from 14,749 backers. The game was greenlit on Steam soon after. I was pretty sold on the game after watching the gameplay trailer, but the knight-with-a-shovel premise has always been promising. What do you think? Is Shovel Knight on your must-play list for 2014?